What an artist did for some publicity - and it has worked ...

... although perhaps not in precisely the manner he had anticipated.

Yazmany Arboleda decided to rent a small vacant store in Midtown, Manhattan (New York) and to publicise his art exhibition stencilled the folowing on the storefront window: 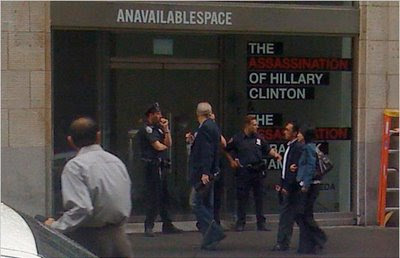 Now he says he's surprised and claims (free registration required) that the secret service is violating his rights; I suppose they may have been a little heavy-handed to begin with, but can you blame them? Obviously both Obama and Clinton, and I would imagine McCain as well, are under secret service protection as potentially the next US President (Clinton no longer, at least in 2008, one supposes). Mr Arboleda says his "exhibition is supposed to be about character assassination. It’s philosophical and metaphoric".

(thru Kenneth in the (212) )
Posted by Bill at 3:42 pm
Email ThisBlogThis!Share to TwitterShare to FacebookShare to Pinterest
Labels: Advertising, art, Politics, USA