Today, 4th February 2014, is an historic day in Scotland, because today the Scottish Parliament voted overwhelmingly for same-sex marriage, or more colloquially for "equal marriage". The negative amendments proposed for the 3rd reading of the Bill (formally known as the "Marriage and Civil Partnership (Scotland) Bill") were all rejected and the Bill, once it has been given Royal Assent, will become law.

With this vote, Scotland becomes the 17th country in the world to legislate for same-sex marriage. 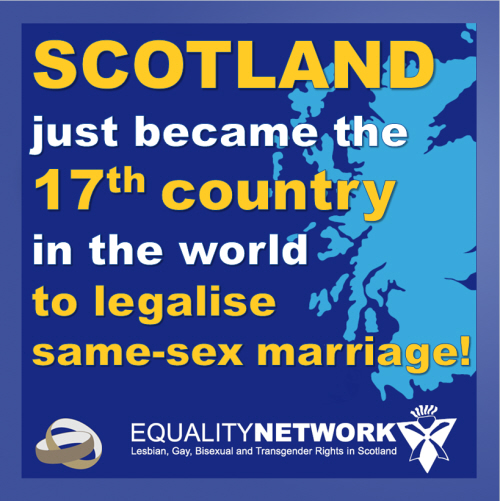 As mentioned earlier, the vote in the Scottish Parliament today was massively in favour of this legislation, with 105 voting for and only 18 against (* - see below). 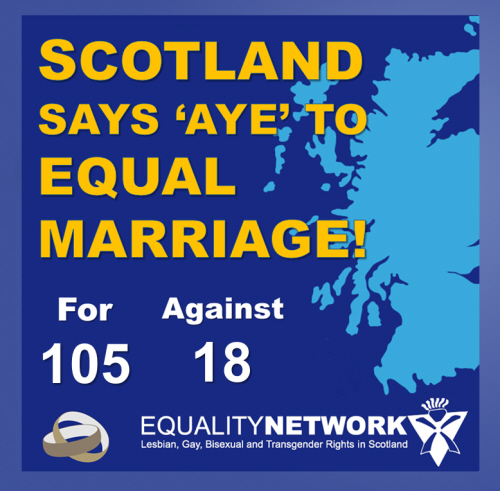 In a post-vote video-message the Scottish Government's Cabinet Secretary for Health and Wellbeing welcomed the vote:

- according to what Alex Neil MSP said, the Scottish Government will now be working with the UK Government at Westminster to ensure that the first same-sex marriages can take place in Scotland before the end of 2014. It will be recalled that the UK Parliament at Westminster has already legislated for same-sex marriage in England and Wales and it is likely that the first such marriages will take place there during the first half of 2014; Royal Assent for this legislation was granted during July 2013.

Unfortunately the Northern Ireland Assembly has not so far proposed similar legislation for Northern Ireland and from what I can gather has no current plans to do so, but at least in the other three parts of the United Kingdom (England, Wales and now Scotland) this welcome legislation is now almost in place - Royal Assent has already happened for the England and Wales legislation and I expect similar Royal Assent will be granted for Scotland quite soon. I mention Northern Ireland not to be negative on this joyous day, but simply to highlight that the job is not yet finished and that efforts must continue to ensure that all parts of the UK legislate for equality.

* - Once I have full details of the "105 for / 18 against" votes I will add an update at the end with relevant information.