Alex Salmond and his silly letter to "The Scotsman" newspaper

I first became aware of this via a Facebook page I follow, but think it requires a mention here too, specially as we are only three days away from local government elections in Scotland, when we all have a chance to reduce the presence of the SNP, if not 'send them packing' entirely (my preferred option).

The Scotsman has now published Alex Salmond's letter in a separate "rebuttal" article and you can read what it says here.

You can also read the original article, written by Euan McColm to which Mr Salmond has taken exception, by clicking here. Nothing in Mr McColm's article is, in my opinion, any way intemperate, or "over the top", indeed I think it goes out of its way to present both sides of a very contentious debate.

Below I reprint my own comment, first published as my response to the brief posting I saw in the Facebook page I referred to above, which really only linked to Mr Salmond's letter, so that more people might see it:


* - Alex Salmond was a guest yesterday on BBC Sunday Politics, hosted by Andrew Neil, and you can view the whole interview below as someone has kindly uploaded it to YouTube: 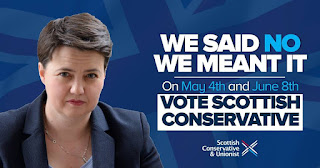