Her Majesty the Queen grants First Minister Salmond an audience 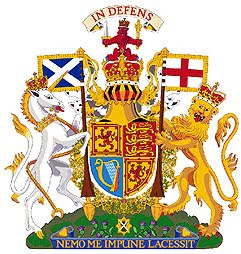 I noticed in yesterday's Telegraph, in the 'Court Circular' there, that Her Majesty the Queen received in audience The Rt Hon Alex Salmond MP (First Minister of the Scottish Executive) on 13th July, during Her visit to Scotland. The audience took place at the Palace of Holyroodhouse in Edinburgh, Her official residence in Scotland.

Her Majesty is after all the person who signed the Scotland Act 1998 and nowhere in that document is the style and title of "First Minister of the Scottish Government" provided for. Maybe one day, if the Scottish people vote in sufficient numbers for the separation of Scotland from the rest of the United Kingdom and for the creation of a separate State (whether monarchical or republican), we will have a "Scottish Government", but that day is not yet here and Mr Salmond has no right to use that term until one is created. Frankly Mr Samond's use of this term makes me think of some other jumped-up nobodies who have given themselves ridiculous titles over the years (such as Idi Amin who styled himself as "His Excellency, President for Life, Field Marshal Al Hadji Doctor[B] Idi Amin Dada, VC,[C] DSO, MC, Conqueror of the British Empire in Africa in General and Uganda in Particular" or Jean-Bédel Bokassa of who styled himself "Emperor of the Central African Empire", not to mention Muammar Abu Minyar al-Gaddafi of Libya who has variously styled himself "Guide of the First of September Great Revolution of the Socialist People's Libyan Arab Jamahiriya" and "Brotherly Leader and Guide of the Revolution".

I am being exceedingly pedantic, I know, but Salmond's unsubtle assumption of a title he has no legal entitlement to use is not the only instance (nor the most serious) where the terms of the Scotland Act 1998 has been ignored and glossed over. I refer to the more serious issue of the number of MSPs which remains at 129, despite the provision in the Statute requiring a reduction in the number of MSPs in proportion to the reduction in Scottish representation at Westminsiter from 73 MPs to 59, which would imply that the number of MSPs should in fact now be 108 instead of 129. The political fudge a few years back in the Scottish Parliament which allowed this to happen is totally disgraceful and reflects simply that 'jobs for the boys [and girls]' is seen by MSPs as more important than adherence to law. The apparatus of the Scottish Parliament costs us a great deal of money and continuing to pay for 21 MSPs without any basis in law is just another example of how the Scottish people's interests are regarded as secondary to the naked greed of our political representatives.
Posted by Bill at 3:53 pm
Email ThisBlogThis!Share to TwitterShare to FacebookShare to Pinterest
Labels: government, Monarchy, Politics, Scotland, UK