The cleanliness of Moroccan toilets - and poetry, too!

I came across a most interesting article in the Big Brother Maroc blog this evening, linking to a website there devoted to the notion that lavatories, toilets or whatever 'euphemism' you wish to employ, do not have to be disgusting, but too often are. It aims to focus attention on really crass examples and thereby encourage the operators of these locales to clean up their act. I post two photographs below, the first completely disgusting and the second not (it would seem) bad at all, to show that filth does not have to be the norm:
The filthy toilet on the train between
Casablanca and Mohammed V Airport 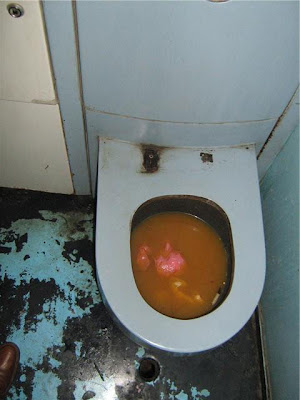 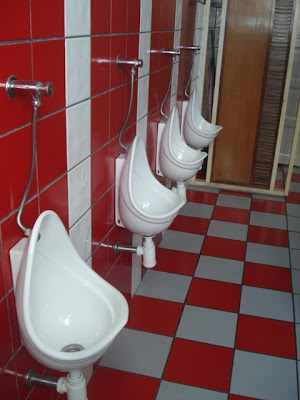 A long time ago I lived in Morocco for a couple of years and have been back a few times in later years, so am always interested when I hear mention of the country as I enjoyed living there a lot. My memories from there, so far as toilets are concerned, range from the perfectly pleasant to the completely awful, but in all honesty the same could be said about many (if not all) of the countries I have lived in or visited. I do recall that the male staff toilets in our Casablanca office were particularly disgusting (on one occasion a 30 feet section of drain had to be replaced because it had become blocked with - well suffice to say it wasn't pretty! The real problem was an over-enthusiastic use of toilet paper - the consumption of this commodity there was truly extraordinary, for a staff complement of only about 55 in all.), but on the other hand other 'traditional' toilets there were often perfectly clean, if 'exotic', for someone used to a sit-down lavatory. However I did spend a day in what might laughably be called an hotel room in the southern Moroccan town of Tan Tan (map) which remains to this day (36 or 37 years later) the most awful I have ever experienced - straw-filled bolster mattress, no sheets, just a rather soiled-looking blanket; it didn't do me much harm though, as I'm still around to tell the tale! Tan Tan is about 350 Km south of Agadir, itself about 360 Km south of Casablanca, where I lived.

I think this idea of highlighting unsavoury toilets could usefully be copied for other countries - it would provide a useful service for residents and travellers alike and perhaps encourage operators to do better.

Oh, the poetry! In the Big Brother Maroc blog I found this sentence in the relevant article particularly delightful and expressive:
"En plus, pour vos soirées ou sorties, n'hésitez pas à consulter ce site pour éviter les endroits les moins propices à notre confort sphinctérien."
(In addition, for your evening celebrations or your excursions, don't forget to consult this website so you may avoid places less conducive to your sphincteric comfort.)
- don't you just love it? There are a lot more turns of phrase in that blog that have brought a smile to my face!
Posted by Bill at 11:11 pm
Email ThisBlogThis!Share to TwitterShare to FacebookShare to Pinterest
Labels: Health, Health and Safety, Morocco


An ATOM feed for this blog is
available here.