I've just come across this report in the Herald about the recent dramatic fall in pre-tax profits at Graham's Dairies, down 42.5 per cent, whereas turnover rose a significant 20 per cent.

This is usually a sign of over-trading, gaining turnover at the expense of margins. Graham's supplies dairy products to supermarket chains Asda, Sainsbury, Waitrose and Tesco and recently won new business from Morrisons; all have been conducting a 'price war' to gain/retain market share in the current difficult economic climate (and of course it was announced only a couple of weeks ago that Tesco has had very poor trading conditions over Christmas, resulting in a significant fall in share value for the company with renewed profit warnings for the upcoming Easter trading period).

Graham's describes itself as the 'largest independent dairy' group in Scotland. I last wrote about the Bridge of Allan-based company in September 2010 when it was announced it was acquiring Claymore Dairies, at that time the largest employer in Nairn.

All this is unfortunately a graphic illustration of the general malaise that the country, the EU and the wider world is experiencing just now and quite probably for some time to come - as I have written here before "hold on to your hats, folks", expect things to get worse before there is even the glimmer of a prospect of them getting better (for those who remain standing).

UPDATE (Friday 27JAN2012 13.50 GMT) I had not realised that Graham's Dairies was not the only dairy company in the news. The Glasgow-based Robert Wiseman Dairies agreed a couple of weeks ago to be acquired by the German Muller in a cash deal valued at GBP 279.5 million; the company announced 16JAN2012 that more than half the shareholders have agreed; although they have not yet officially voted, it is regarded as a 'done deal'. The company produces about 30 per cent of the fresh milk consumed in the UK. For an insight into how a 'savvy' investor analysed prospects at Wiseman to his advantage click here. Like Graham's, Wiseman recently reported a major drop in profits and the further concentration in production is already worrying some farmers as Muller have apparently in recent weeks cut the price they pay for milk by 0.5p to 29.8p a litre, presumably a way of increasing their own margins (by use of their significant buying power) at the expense of producers who are faced with unavoidably increasing input costs.

What we mean ... What they think we mean

Occasionally I come across something interesting, or amusing, or both and this seems to qualify.

When British people say something [idiomatically], do other nationalities, whether English-speaking or non English-speaking, always understand accurately what is implied by the words being used? Communications between people using supposedly the same language, English, as their native tongue can certainly be fraught with misunderstanding when British, Americans or Australians are involved, although I'd say this tends to be marginally less so when I've dealt with Canadians. My own experience over the years has led me to understand that very often misunderstandings arise because people (in this case we British) do not necessarily say directly what they mean, out of 'politeness' or an unwillingness to upset the other person in a social or business context. Mind you, it is not only we British who do this - my dealings with non-European nationalities such as Chinese or Japanese have often thrown up similar mutual misunderstandings and for much the same reasons, not to mention the perils of taking at 'face value' what a French person really means when [s]he says something. 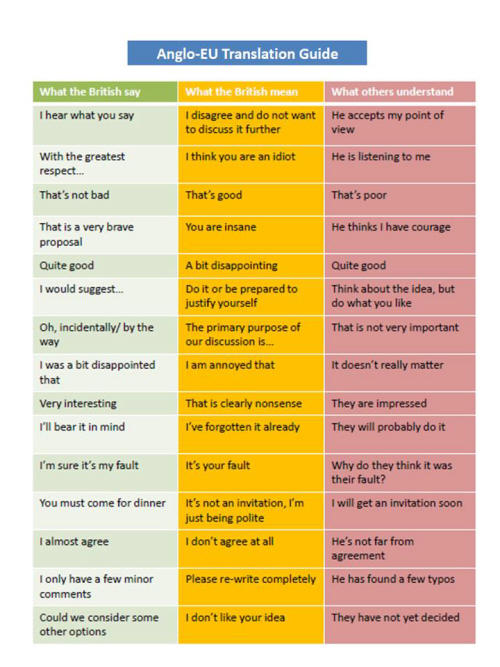 I asked him where he got it from and he mentioned the website of a UK charity, but it seems they got it from someplace else and so on - this article in the University of Pennsylvania's "Language Log" gives more background although how accurate or exhaustive it is I cannot say. It adds some more detail to the table above and gives a few phrases in French which can mask what is really being said. In my experience all these are scarily accurate.
Posted by Bill at 9:38 pm No comments:
Email ThisBlogThis!Share to TwitterShare to FacebookShare to Pinterest
Labels: British English, culture, English language, French

Nairn man may face jail, but there's another aspect to the incident

A young Nairn man has been told he may face a jail sentence, even if the preferred punishment is a 'restriction of liberty' order (I presume this is something like a curfew enforced by an electronic tag?) for having fired an air-gun over the heads of three boys and a girls (aged between 12 and 15) who were engaged in throwing snowballs at his door. Apparently he asked them to stop doing this, but when they ignored him he used his air-gun.

It is clear that the domestic circumstance of the man who fired the air-gun are somewhat precarious and that if he cannot supply a permanent address the only alternative may be some kind of custodial sentence.

Obviously it is not acceptable for someone to use an air-gun in this manner and he requires punishment, but I wonder if the children who were making a nuisance of themselves will be admonished in any way at all? The article certainly gives no clue about this. Will their parents take them in hand and ensure they do not make a nuisance of themselves in future? Presumably they were discussing the incident (jokingly or in a terrified manner, we are not told) when their 'Guidance teacher' (whatever that is!) overheard them. Will their 'Guidance teacher' be telling them the facts of life about what it takes to be a 'good citizen'? Obviously the man possibly facing a jail sentence needs to learn about this too, but those kids need to know that they shouldn't be going around annoying their neighbours 'for a lark'!

Posted by Bill at 10:44 am No comments:
Email ThisBlogThis!Share to TwitterShare to FacebookShare to Pinterest
Labels: Crime, Education, Highland Region, Nairn

Could north Scotland get a Waitrose in coming 5 years?

A couple of evenings ago I was discussing with some friends here our current supermarket shopping options, both very locally here in Nairn and within reasonable distance (by car or bus) in Inverness, Forres or slightly father afield in Elgin. Very locally, we now have a recently-opened and very welcome Sainsbury, with the main alternative being the decidedly inferior (in various ways) Co-operative. In Inverness there are several Tesco outlets, as well as a Morrison, plus various others such as a Co-operative, Lidl and Aldi. Forres duplicates up with a Tesco and a Lidl and Elgin has various including the only Asda in the area, until the planned store in Inverness opens later this year.

We all agreed that it would be great if a Waitrose were to come to this area, but thought that this was unlikely - but one can live in hope. Currently there are 3 branches in Scotland (2 in Edinburgh, 1 in Glasgow), with a 2nd store planned for Glasgow soon. However, Waitrose has signalled it would like to open a further 16 stores in Scotland over the coming 5 years. Now, I expect most of those will be in the Edinburgh or Glasgow area, with perhaps Aberdeen and Dundee getting a look-in, but maybe, just maybe, their consumer profiling exercises could justify one further north, possibly in Inverness, or even (I said I was being fanciful!) in little old Nairn?
Posted by Bill at 2:06 pm 4 comments:
Email ThisBlogThis!Share to TwitterShare to FacebookShare to Pinterest
Labels: day-dreams, Highland Region, Scotland, shopping

Honesty in advertising, if not at all pretty

I daresay if you're in the market for a "pre-owned" stained, damaged and scummy "trailer-park" home this might be just the thing: