(Note: to download the complete EU Entropa document in .PDF format, please see the link at the end of this article.)

... by and on the Czech EU Presidency who commissioned it to inaugurate their 6-month Presidency of the EU. I had viewed a story about this several days ago and downloaded the full .PDF document containing all 27 elements of the installation, representing each EU member state, and had spent a pleasant and amused hour studying each of the images and the accompanying commentary, together with the details of the artists from the relevant countries credited with producing their own country's representation. I did think that many of the entries were somewhat obscure and some of the text commentary even more bizarre, but I must admit I just assumed it was far too sophisticated for li'l ol' me to understand. Now I see that my instincts were quite sound and this whole installation, intended by the Czech EU Presidency to be a gently mocking commentary on the pretentiousness of the EU is in addition, and completely brilliantly, a marvellous spoof on the Czech Government itself, which commissioned it! The artwork is NOT the work of 27 artists, one from each of the EU member states, but is in fact the work of one very clever Czech artist, the man whom the Czech authorities commissioned to 'sub-contract' the individual countries' entries out to artists in those countries, but who in fact has made the whole thing up, himself.

I am very much pro-EU, but I think the said David Černý is a wickedly clever person; I do hope the Czech Presidency does not 'chicken out' and accede to the growing calls to censor at least parts of it, for example the Bulgarian segment, which depicts it as a series of squat toilets, based on its past subjugation within the Ottoman Empire: 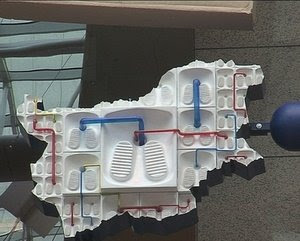 Or for that matter the UK, which is depicted - well it isn't depicted at all (top left of the image below), supposedly a reflection of the UK's detachment from EU affairs: 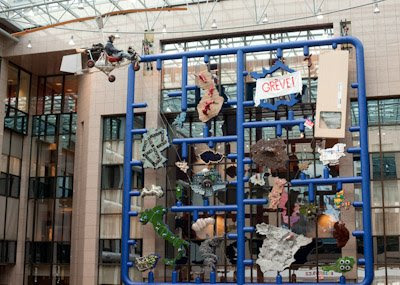 Just below where the UK segment would be, if it were there at all, is that for Germany, supposed to represent its motorway network, but rather too similar to a 'swastika' for some, or the mordant humour of the French 'contribution' (top right) with the word 'Greve!' ['strike!'] plastered across an outline map of France.

The supposed artist for the UK entry is one Khalid Asadi, whose listed credits and commentary to 'his' contribution (or lack of it, rather) I quote in full, so you can get the full flavour of the hoax:


- now if you understand any of that, then you're a great deal more intelligent than me!

Well done, David Černý, and well done too to the Czech Government which brought us this gem of modern art, masquerading imperfectly as pseudo-art when it is in fact a quite brilliant commentary on the EU and its member states, quite apart from being a completely subversive take on the pseudo-intellectual posturing of much of what passes for modern 'art', the art equivalent of the Emperor's New Clothes.

Here is the statement for the moment appearing in the Czech EU Presidency's website about the fiasco they and we have been the unwitting (but in my case highly-amused) victims of:


I am of course now unable to locate the complete Entropa .PDF document on the EU website, so I have uploaded my copy of it to one of my own websites and you may download it here (it's a large file, so will take a few minutes to download, depending on your internet connection speed).
Posted by Bill at 5:24 pm
Email ThisBlogThis!Share to TwitterShare to FacebookShare to Pinterest
Labels: art, Czech Republic, EU