Bill's battle with his weight

All my life I have had a problem controlling my weight. Over the years I have tried many different methods of trying to rein it in and many have worked temporarily, for a few years (specially those based on controlling calorie and fat intake), but ultimately I have found all such diets to be unsatisfactory because I was always left feeling hungry and with no fundamental change to the types of foods I was eating, other than to reduce the quantities.

This demands a degree of will-power which, I am sorry to have to acknowledge, I do not always possess in sufficient quantities. Some years ago, therefore, I decided to give the Atkins 'way of eating' a go and had major success in losing weight and in maintaining that weight loss for several years after I reached my 'target' weight; the page link is to the section of my personal website where I cover in considerable detail my experiences whilst following the Atkins 'way of eating', more or less warts and all. However, for roughly the last 15 to 18 months I must record that I have gained back a rather too significant amount of weight, although nothing like as much as when I first started to follow the Atkins method.

The Atkins 'way of eating', despite the criticism it receives from people who have never taken the trouble to find out about it properly and instead follow the media scare-stories that it involves too much protein and little else and will eventually end by damaging your liver and increasing your cholesterol.

The truth is that the main basis of Atkins is to control carbohydrate intake and that protein plus certain vegetables (particularly green salad vegetables plus radishes) form major components. The purpose is to control blood sugar, which in turn controls the rate of insulin production, which in turn controls one's appetite. It is a matter of body chemistry. I know from my own expperience that following the initial 'Induction' stage strictly is the easiet stage of Atkins - one is never hungry and 'cravings' do disappear, generally speaking. I know from my own experience, too, how much my blood pressure has improved (admittedly usually the case when there is significant and controlled weight loss, whatever diet method is followed), but equally-importantly I know just how beneficial Atkins has been for my cholesterol levels. This may be counter-intuitive to those who cannot get past the fact that butter is not 'banned', nor is salt, but it does work - and tests I have had done by my doctor confirm this to be so.

However, it is undeniable that once one gets past the 'Induction' stage, onto the later stages ('Ongoing Weight Loss', 'Pre-Maintenance' and 'Lifetime Maintenance'), it can become a little more complicated if one is not careful. During these stages one adds back into the diet, in a slow and progressive manner, small quantities of things not permitted during 'Induction', including certain fruits (berries of various kinds), certain vegetables (excluding things such as potatoes, carrots and parsnips because of their high carbohydrate/sugar content) and nuts. A little too much of these 'treats' has a rapid effect on the appetite, because the sugar they transfer quickly to the blood-stream triggers insulin production and a little later renewed food cravings. Although alcohol is prohibited during 'Induction' it is permitted in limited quantities during later stages, but alcohol reduces inhibitions as well as adding sugar to the blood, even in quite small quantities.

Anyway, I have decided that I must return for a while to strict adherence to the 'Induction' stage of Atkins, but reinforce this with some motivational messages to myself. I have already had to size-up some of my clothing again and it has gone quite far enough, so I have created some signs, which are being placed at strategic locations throughout my home here and in Spain. However, the sign below is valid for anyone trying control their diet, whatever method is followed. The image is in .JPEG format, but I have also prepared a .PDF version (in landscape A4 size) for people who may wish to download it and print it out for themselves (click here). Wish me luck! 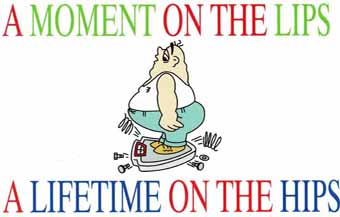 Posted by Bill at 12:05 pm
Email ThisBlogThis!Share to TwitterShare to FacebookShare to Pinterest
Labels: Diets, Personal