Flags flying in the Netherlands

Well, I am now safely ensconced in my house in Spain, arriving here in the middle of Monday-night/Tuesday-morning; the flight into Alicante (from Maastricht-Aachen) arrived bang on schedule at 11.30pm and my luggage was delivered fairly rapidly. However, I then had to stand in the queue to get my rental car and whilst there were two counter-staff on duty at the company I am using, one had to leave the office on a couple of occasions to sort out problems for previous renters. In any case, by about 1am I was on my way, arriving here at about 2.30am (ouch!) - the sensible thing would have been to get off to bed more or less immediately, but I was too 'hyper' to do that, so ended up unpacking my suitcases and getting some other things out of boxes and storing it all away, then I read for a while in bed before finally putting the light off at at 4.10am . Oh, did I mention there was no water when I arrived? There was power, though, so I was able to put the air-conditioning on as it was still very warm, probably about 26 degC outside and several degrees higher inside. Up again at about 7.30am, surprisingly refreshed and apart from a brief nap in the afternoon, made it through the day and evening more or less normally. However, I had a good sleep on Tuesday night!

My journey from Scotland began last Wednesday morning (6th August) with a flight down to London Luton from Inverness, with a delayed departure of about 90 minutes, but as I had such a long time to wait for my Amsterdam flight at Luton, it made no difference to my connecting flight, which left on schedule. After a lengthy walk through Amsterdam airport (and a scrum waiting to get through passport control), I got a train (clean and, of course it being the Netherlands, absolutely bang on schedule) for Sittard in the Limburg region in the far south of the country, not far from Maastricht and by just after 10pm was sitting in my brother and sister-in-law's house. The next five days were given over to entertaining and parties, with an excursion onto the water on my brother's boat, mainly to celebrate his 60th birthday and their fifth wedding anniversary, as well as her birthday, which all fall withing about a month of each other. Today 14th August is in fact his actual birthday, although the celebrations were held last weekend so as many as possible could be there (roughly 80 people attended the main party in the village hall last Saturday evening) and as it's the custom in the Netherlands to fly flags outside homes to mark significant events in the lives of the families who live there, my brother and sister-in-law followed this very nice tradition, as the photograph taken of the front of their house last weekend shows: 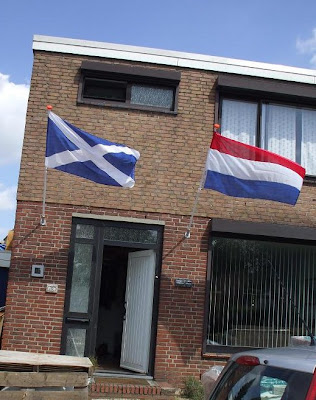 Regular readers of this blog will know that I am not a supporter of Scottish independence/separation from the UK so I would of course have flown the Union Flag, rather than the Scottish 'Saltire', although I am just as proud of my 'Scottishness' as I am of my 'Britishness', just as I expect most English, Welsh and Northern Irish people are proud of their respective heritages too. However, my brother used to live in the Westminister constituency of Alex Salmond, leader of the SNP and currently First Minister of Scotland and there is no doubt that his voting history is one of the reasons for the handsome majorities that Mr Salmond has achieved both as an MP in Westminster and latterly as an MSP in the Scottish Parliament in Edinburgh, even though like Sean Connery he has chosen not to live in the country whose political separation from its current arrangements he supports; this is just a friendly brotherly 'dig', of course - and shows that within families there are healthily differing viewpoints on many matters without affecting the basic friendliness of our relationship. Happy Birthday!
Posted by Bill at 5:43 pm
Email ThisBlogThis!Share to TwitterShare to FacebookShare to Pinterest
Labels: Murcia, Netherlands, Spain